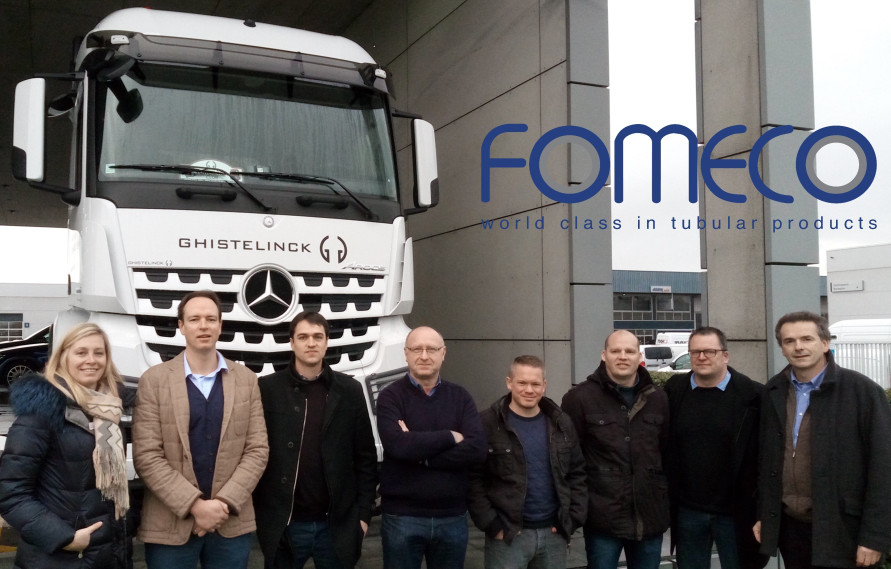 After 1 year of intense contacts with Daimler, Daimler has very recently decided to choose 100% Fomeco for the new model exhaust pipes for their MERCEDES ACTROS truck. <BR> The project will start in 2019 and this for a period of 6 years with a total turnover of more than 30 million euros. From 2020, the mega order will generate an additional annual turnover of approximately 7 million euros.  This will make Daimler one of Fomeco's largest customers at a stroke, together with the VOLVO group (Volvo & Renault), the PACCAR group (Daf & Leyland) and the VW group (Scania & Man). <BR> After the record year 2017, with Fomeco exceeding the 20 million euro annual turnover mark for the first time in its existence, this order represents a further significant step in the success and growth story of the producer of various tube products for trucks, buses and "off-road" vehicles. <BR> This order is expected to exceed the 30 million euro annual turnover mark in 2020, i.e. a growth of more than 50% in just 3 years. <BR> Production will mainly take place at the Zwevegem site, supported by the subsidiary Fomeco Hydroforming in Roermond, the Netherlands.  Fomeco do Brasil is currently competing for the order for the Latin-American market. <BR> Daimler Worth in Germany and Daimler Aksaray in Turkey will be delivered directly to the assembly line from Zwevegem. <BR> To realise this mega order, the current investment budget will be doubled to 5 million euros. <BR> The ongoing recruitment campaign in Fomeco will also be further expanded. In addition to the current 30 vacancies, 20 additional vacancies will be added in the coming weeks and months. Among other things, Fomeco is looking for operators and institutions in a 2-shift system, as well as maintenance technicians, engineers and team coaches.

Last week DAF Trucks invited their best suppliers for the presentation of their new trucks DAF XF, XG, XG+. Fomeco was also present and we were...

At the TUBE fair in Dusseldorf, we were able to admire our latest investment purchase, namely a world-class bending machine for the automatic...

We are proud to announce that a 2nd 3D laser was purchased within the Fomeco group due to the acquisition of various beautiful new projects. This...

Fomeco is continuing to invest and has started the conversion of this villa into the new headquarters of fomeco. An important step was the...